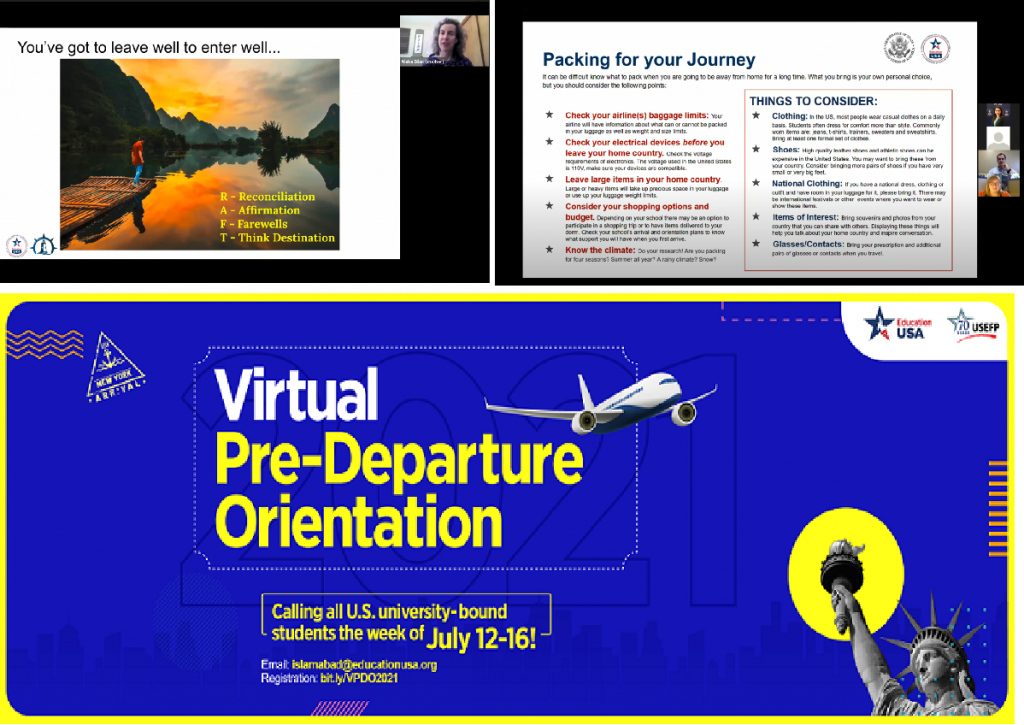 EducationUSA Pakistan organized a Virtual Pre-Departure Orientation (VPDO) from July 12-16 for students set to begin their studies on a U.S. campus in Fall 2021. The daily hour-long sessions aimed to prepare students for a smooth transition to life in the United States by covering topics such as: preparation and arrival, cultural adaptation, student life, and classroom culture. The series culminated in an exciting panel discussion with current students and alumni of U.S. universities sharing experiences from their journey of traveling to and studying in the United States.

This year’s VPDO also gave students the opportunity to participate in a quiz at the end of each session to win exciting prizes. More than 200 participants attended the sessions and panelists included a consular officer from the U.S. Embassy, an educational transitions coach, EducationUSA advisers, and representatives from the Florida International University, American Musical and Dramatic Academy, University of Texas, Arlington, and University of Wisconsin-Stout.

The VPDO enabled EducationUSA Pakistan to connect with outbound students, their parents, and school counselors, and facilitate a smooth transition through information sharing. These sessions not only offered students guidance on the next steps, but also gave parents and school counselors the much-needed reassurance that their child/student would be well-equipped for the impending change.

Embarking on a new journey

Outbound student Muhammad Saad Asad will be attending Minerva Schools at KGI this fall and actively took part in the VPDO, even taking home a few prizes.

“The VPDO covered every topic relevant to studying in the United States and were led by experts in the field. After attending these sessions, many of the questions that I had about college in the USA were resolved and I feel far more comfortable starting my journey of U.S. higher education,” says Saad.

After a virtual freshmen year, returning student Syeda Mahnoor Raza is looking forward to starting her second year at the University of Rochester on campus – something she is very excited about.

“Even though I’m a sophomore now, EducationUSA Pakistan’s VPDO really helped prepare me for the in-person college experience in terms of travel, student life, and campus culture. The guest speakers and current student panel provided valuable insight into what to expect when moving to the United States as an undergraduate student,” says Mahnoor. “The VPDO helped demystify the transition and helped do away with many of my last-minute apprehensions before setting off for college.”