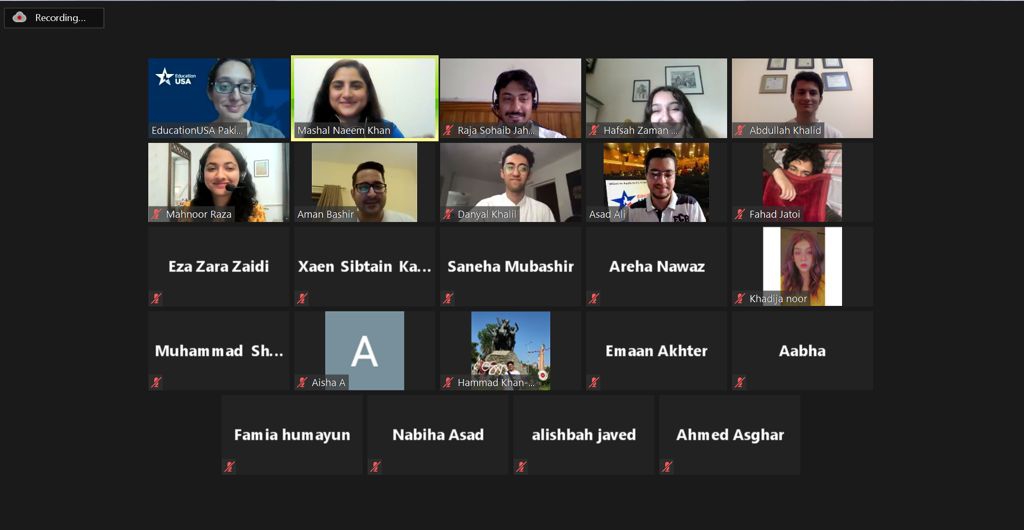 A screenshot taken during an interactive CampUSA 2021 session.

EducationUSA Pakistan’s annual CampUSA went virtual for the second year running. Over a period of three weeks, registered campers took part in interactive, engaging sessions on everything they needed to know about the attending college in the United States.

Over 34 students from seven cities were a part of the camp this year. There were three sessions each week and topics covered ranged from shortlisting universities and communicating effectively to the importance of community service, difference aspects of U.S. college applications, and American culture.

Among the highlights were a 1.5-hour long workshop by the well-known College Essay Guy, an SAT workshop, and a session on campus life conducted by former EducationUSA advisees and CCC students. In the last week, the campers worked in groups to present on various topics – the objective of this was to encourage public speaking and time management.

When the camp came to an end, the feedback EducationUSA Pakistan received was quite encouraging. Here is what some of the campers had to say about their experience:

“I really enjoyed communicating with the other campers and learning new things. It’s my dream to study in the USA and I always wanted someone to guide me about that. Sir Aman [EducationUSA adviser Aman Bashir] was great and now I have a much better idea about how to plan for my U.S. education.”

“I was really shy at first, but the sessions and the group project helped me open up. By the end, I was confidently conversing with others. The camp was really useful for me.”

“My experience at the camp was amazing. It gave me the opportunity to meet new people and collaborate with them. The Zoom meetings and events were well organized and I learned a lot about universities in the United States.  Now, I definitely have a sense of how I should look for a school that fits me and how to approach my essays. Looking forward to the CampUSA next year!”