Dreams of Stardust by Meeral Umar 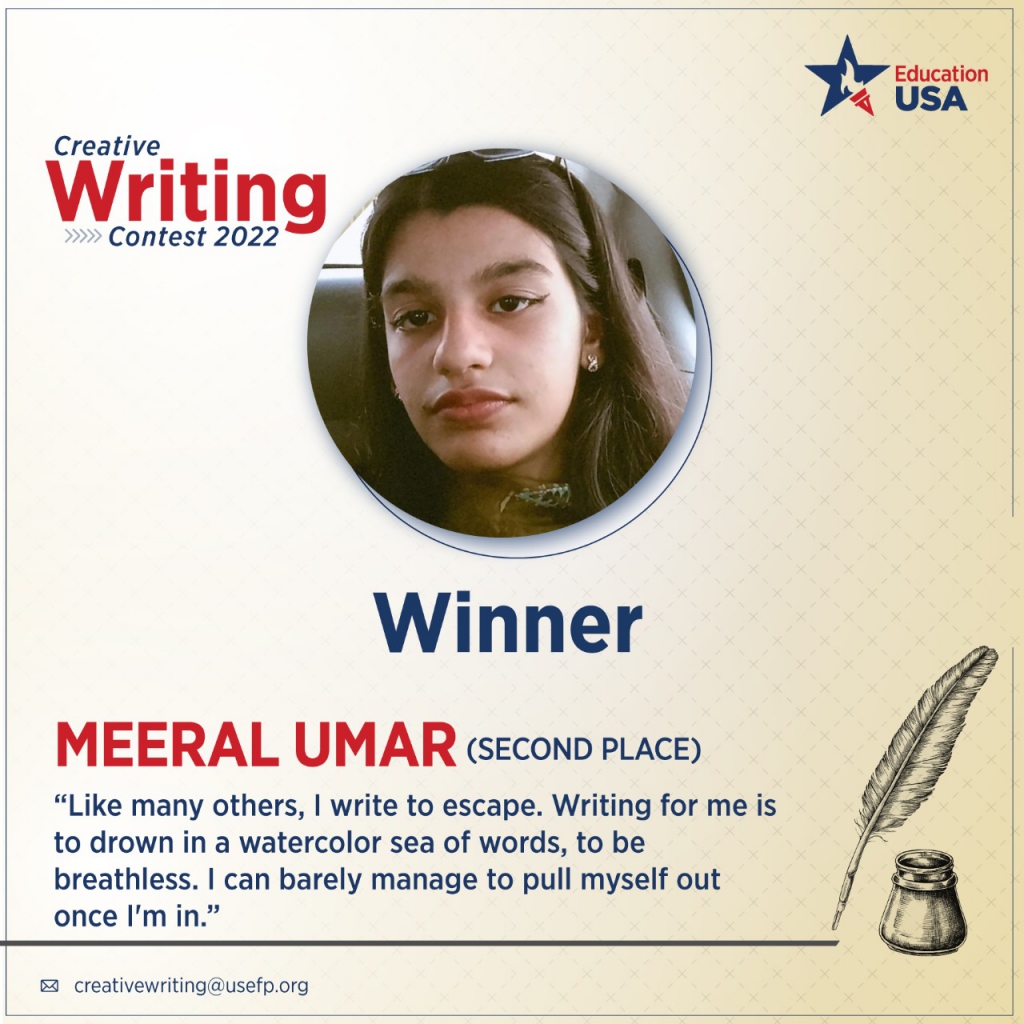 Yalina was fading into the murky gloom of shifting dreams when she heard her grandsons shout with childish delight.

In a state of ebbing pain, she did not particularly cherish the idea of leaving the comfort of her battered charpai, but she had little or no choice. Groaning as she slipped into her rubber flip flops, she adjusted her blossom pink scarf lined with yellow petals over her head. She heard her grandsons again; Asif, seemingly chasing after his younger brother, Hasan, in an unsuccessful attempt to convince him of something.

Warm gusts of wind coddled her wrinkled skin when she stepped out in the scorching sunlight. Yalina trudged towards her grandsons, playing with damp mud and paper boats along the banks of the Indus, which gurgled past cheerily, splashing her face with blissful droplets of water. Hasan sat with his legs crossed in his bleached kameez across from Asif, sulking quietly. Asif tinkered with a sleek glass bottle, which sparkled in the glorious sunlight.

“Asif, what is that in your hands? And why is Hasan looking so moody?” she demanded.

Asif looked up at her, masked in unusual exuberance, and grinned. “Nani Jaan! I found this bottle washed over upon the banks of the river, and Hasan is only jealous he didn’t spot it first.”

Yalina frowned. Standing here for but a moment had riddled her back in a disturbing ache, and she was unsure if she could bear it any longer. She told herself that this wasn’t a matter of concern, just another meaningless fight amongst children, which would settle before she had the chance to prepare lunch. Scolding them both lightly, she dragged her bones away from the festering heat, and back into the lonely coolness of her mud house.

As the day grew weary and the sky bathed in a pool of rippling moonlight, Yalina knew, laying on her charpai, that she was dying.

Her main priority was the children. She had written to their father, away in Islamabad, of her decreasing health and increasing age. Yalina hoped against hope and years of experiencing the merciless truth, that she could discover a way to stay longer with her grandchildren. After the death of their mother, they had instinctually relied on her as a guardian and a caregiver. And so had she. Asif and Hasan were her sun, bright and explosive, and around them she based her remaining days. Petrified of their lonesome futures, she fell into a breezy but tiresome slumber.

She dreamed again of the mountains.

She was a carefree girl again, her thick brown hair flowing in the wind, white garments splattered with mud, as she ran and ran and ran. Herds of goats nuzzled her wind-beaten face, others grazed the lush blades of grass that smothered the fields, along with vibrant yellow and white flowers, their sweet perfume lingering heavily in the valley. Streams of icy water rushed along, and the air sang a song of mischief and life. She imagined the fairies and giants from the stories her mother told her guiding her on—paris and deovs and humans all tangled up in a dance of beauty and fragrant flowers and gleaming snow.

Yalina of the mountains.

She opened her eyes.

When she identified Asif on her side, sprawled lazily with his mouth half open as he dreamed, her chestnut eyes couldn’t help but fall on the glass bottle clutched tightly in his arms. Gently, she took the bottle out of his grasp and studied it in the youthful light of dawn; it was completely transparent, and held a strange assortment of powders and glitter in it, floating in a thick fluid. The cork hugged the top, and Yalina marveled at how the bottle had traveled across the waves of the Indus, yet made it across in a fine condition.

A gasp escaped her chapped lips when the glitter in the bottle began to bubble and shine blindingly, hurting her eyes; she watched with wide eyes when the cloudiness subsided, and all that was left behind was a three dimensional landscape. Mountains, with ivory peaks, carved with delicate care to perfection, and birds flying above the heavens, and meadows of plants and goats and sheep. A sinking realization caught her silent. Her mountains.

Yalina felt her exhaustion grow and grow and grow, sure she was still in the faraway land of dreams and nightmares and unfulfilled wishes—a teenage girl, lost in the valleys, with her world of fairies and giants, and her mother, still alive, ignorant to the brutality of reality.

Embracing the bottle to her shivering from, Yalina slipped into what seemed a haunting dream.

When she awoke, she was still there, still trapped within the majestic mountains. Only this time, it was night. Snow layered the fields, euphoric and chill, trodden with footsteps of invisible locals and their animals. The streams were frozen, and glimmered in the entrancing stolen might of the crescent moon. An eerie hush was the only sound in her ears.

Yalina yelped without noise when she realized she wasn’t a girl anymore—she was in her current state, an old, hardened woman with not much time left. Her calloused hands held the bottle—she was sure it was all magic; the bottle had transported her here—an unbelievable, unreal magic, that breathed life into her. Intoxicated on happiness and surprise, she kissed the bottle, which now once again, only contained glitter and the water-like fluid.

Above her, the sky was alive with glittering constellations that smeared her cheekbones in iridescent specks of stardust—magic, Yalina thought. She saw them now, the paris from her mother’s tales, the deovs, as tall as the towering pine trees. She smelled the magic, sugary and syrupy and delicious. In her confused joy, she laughed and laughed and laughed.

She didn’t feel the bottle as it slid from her hands, didn’t hear it as it shattered into a million shards at her feet, reflecting the moon and the shimmering wings of the fairies that flew in the dark.

But unaware that his prized possession had vanished, as the light of dawn painted his cheeks pink, tearful Asif could never wake his grandmother up.