Usama Javed Mirza, CEO and Cofounder of Saving 9, an educationist and social entrepreneur

USEFP is very proud to claim you as one of its Fulbright alumni. Can you tell us what led you to apply to the Fulbright program and what your experience at Columbia University was like?

What led me to apply was my love for teaching. I completed my bachelor’s in physics from LUMS where I joined the university’s student-run Emergency Medical Service department. I was trained there as a Medical First Responder (the training that Rescue 1122 ambulance personnel have) and dealt with over 250 emergencies on campus. In my final year at LUMS, I became EMS’s HOD Training and Development.

After graduating from LUMS, I taught physics, math and first aid (as an extracurricular) at Headstart School in Islamabad for two years, and the more I taught, the more I knew I had found my calling. Choosing teaching as a career, especially as a man in our society, comes with its stigmas. There’s always this stereotype that I was not able to cut it as a scientist, or that I did poorly academically. I almost didn’t apply to the Fulbright because I had recently been through the demoralizing experience of being rejected by all the universities I had applied to independently for a master’s in education – not to mention a few other international scholarship programs. At the end what made me apply was my promise to my father, and some much-needed pep talks from my second-grade teacher, Hareem Atif Khan. 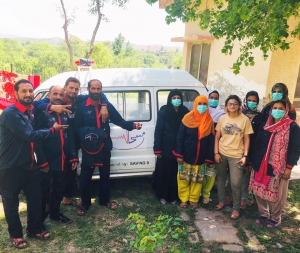 Getting admission to Teachers College at Columbia University – the same university that had previously rejected me, and where my second-grade teacher and inspiration, Hareem, went to, was a happy surprise and a dream come true.

Being from Pakistan, and carrying the first name Usama, I was initially apprehensive of living in the U.S., even thinking of using my last names, Javed or Mirza, or MJ. When I finally arrived in New York City, I was shocked. I came out of the airport wearing a shirt and jeans, diligently hoping to blend in. But contrary to my expectations, what greeted me in the subways and in the streets, was a great ocean of diversity from all over the world. However, the biggest shock came later after meeting everyone at Teachers College: I, a man from Pakistan named Usama, felt welcome.

My experience at Teachers College itself was transformative to say the least. As graduate students we ate, breathed, studied and lived the social justice learning experience. Through our classes, through our projects, through our conversations, and through the real experiences of teaching students in New York City classrooms, we have learned so much about what can be. We now know how to make change happen because we ourselves have been transformed by others!

It’s because I had so many role models at this institution, that I was inspired to empower people in far-flung areas to take charge of their own education and safety.

Tell us a little bit about Saving 9, and how you think your Fulbright experience contributed to this enterprise?

Saving 9, of which I am the principle founder and CEO, is an Islamabad-based hybrid model organization that aims to create communities of care in Pakistan around pre-hospital care for both physical and mental health emergencies. We do this by spreading first aid and mental health literacy and working closely with communities to set up locally run and locally owned systems that work to mitigate casualties. 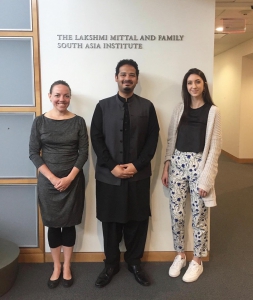 Last year, we were finalists at Harvard University’s South Asia Institute’s Seed for Change competition, and with that funding, have worked to nurture a first aid literate community in Pind Begwal, a village on the outskirts of Islamabad. We have also launched Pakistan’s first women-led ambulance system recently and revived Pakistan’s long-defunct scouts system for high schools.

This year in June, we have been awarded $25,000 by the Tamer Center at Columbia University’s Business School to expand our current initiatives and to launch one of the world’s first mental health ambulance systems. The mental health crisis is rampant across Pakistan, and while there is some awareness about it, there are very few support systems available. The first mental health ambulance was launched in Sweden in 2017 and Saving 9 will likely be the pioneering organization in this regard for the whole of South Asia.

My Fulbright experience helped me think globally about socio-economic problems and look for out-of-the-box solutions. I met many social entrepreneurs in the U.S., and the vibrant culture around startups inspired me to launch my own social venture. The many Fulbright conferences in the U.S. that I attended provided us with professional development sessions around leadership and entrepreneurship, and these helped me shift my thinking around my career path.

Our team includes over 10 Fulbright Scholars among its ranks, in addition to psychologists, doctors, first responders, urban planners, public policy experts, and monitoring and evaluation experts. Many of them I bonded with and found common cause while hanging out and getting to know each other through the many conferences that Fulbright would organize for us throughout the country during our time studying in the US, and the unforgettable road-trips that these would then inspire!

Being an educationist and a social entrepreneur working in emergency medical services must come with its fair share of triumphs and challenges. Can you share a memory that stands out in your journey so far?

One of my sweetest memories is of the day I realized that the ambulance system we set up in Pind Begwal’s Basic Health Unit (in rural Islamabad next to Bhara Kahu) has now in fact become an education center as well. The process of launching Maseeha Ambulance began in October 2018, when we rigorously trained four men from the local community as First Responders. Since then, the team has expanded. We also trained six women from the same community as First Responders, many of whom had previously been housewives. They are the first women in the region to learn how to drive.

I am proud to say that we have helped nurture a community culture of spreading first aid awareness in Pind Begwal. Our First Responders go to the schools and madrassas in Pind Begwal and provide the students and teachers with free first aid training. They have set up a Scouts system in the region through these schools and created a network of trained adult citizens who can be alerted via SMS to respond to an emergency until the ambulance arrives.

This is why the day this photo was taken means so much to me. Standing next to me are three young men who voluntarily had been visiting the BHU for the last six months. They regularly got training from our First Responders and interned in the ambulance. Entirely as a labor of love, they would also accompany our First Responders on their daily classes in schools. On the day pictured below, I took their final practical exams which they passed. It was a very emotional moment. They had worked very hard for six months to get those certificates, and I was very moved by their love of learning, the bond they had created with the team, and their desire to help save lives in their community. 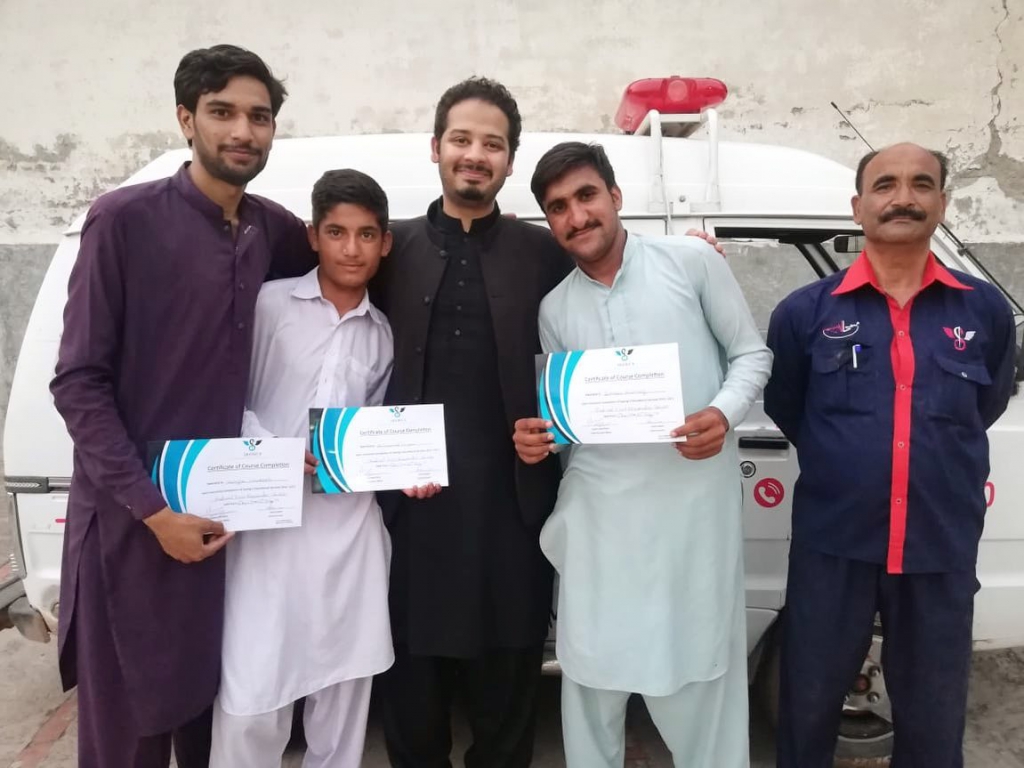 What are your future aspirations?

I want to see Saving 9 work spread to far-flung regions across Pakistan and beyond. It is my dream to see first aid integrated into school curricula and to work with the government to spread first aid literacy across our country, like we are doing in Pind Begwal. We have also launched an innovative pilot around mental health literacy in rural areas with support from the United States Institute of Peace and are about to launch one of the world’s first mental health ambulance systems. In the future, I aspire to have these initiatives scaled up across the country and beyond. First aid and mental health literacy save lives!

Beyond Saving 9, I work as a curriculum and science education consultant for various NGOs and the Punjab government. In the long term, I want to set up a stellar teacher education institute in the country where educators gather to think critically and creatively about teaching and learning – just like Teachers College at Columbia. I also want to eventually someday serve as an adviser to the government on areas of curriculum and teaching and play a strong role in influencing policy and practice in the K-12 education sector.

Any advice for returning Fulbright candidates who want to become positive agents of change like yourself?

I’ve learned a lot of lessons in the last two years, a key one being that the Fulbright network will continue to be a big support in your life. When you get reverse culture shock, hang out with your Fulbright buddies. They will be able to relate and recharge your batteries. When you forget some of the idealism with which you went to the U.S., Khadija Bakhtiar from Teach from Pakistan recommends reading your Fulbright essays again. They will help remind you of the promises you made and the dreams you have for the future. USEFP, PUAN, and the international Fulbright network continue to provide immense support to alumni to start their own ventures, take social initiatives, network, and undergo further professional development. Do add yourself to the relevant Whatsapp groups and stay connected with this amazing community.

Another thing that returning Fulbrighters should know is what gives you meaning – people find meaning in different things. I am at my happiest when I am interacting with people who are directly being impacted by my work (which is why I love teaching and first aid so much), but I also like having some abstract creative intellectual work to do on a laptop from time to time. Find the right balance of different kinds of work that give you meaning. You’ll be at your happiest and create the most impact in the lives of others in your own unique way.