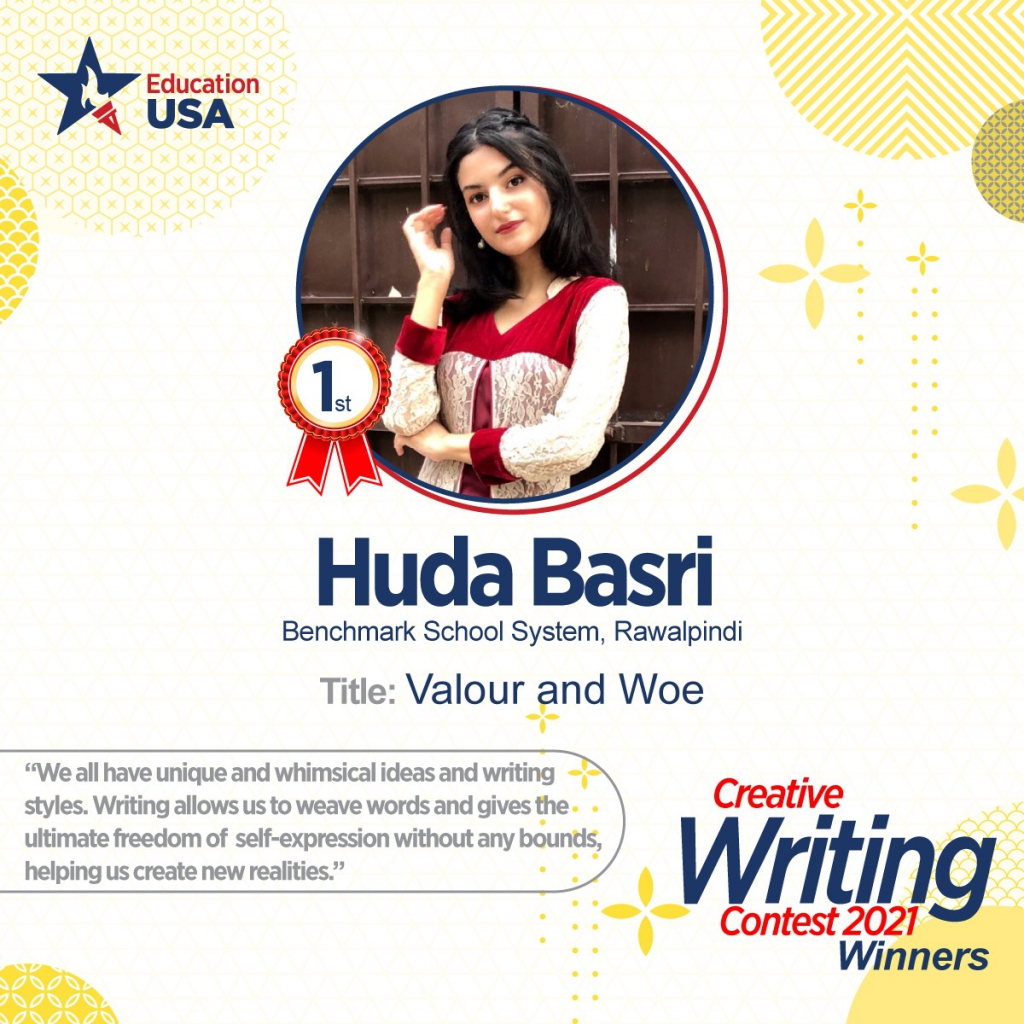 I pressed the red button and everyone around me lost their memory, tears streamed down my face and panic overwhelmed me. The roar of gunshot was almost deafening, compelling me to fixate at one point whilst my heart shattered into a million pieces. The eyes which once looked at me with such pure love were dead. A Hazan man killed him. He killed him. He killed him. I screamed and screamed till darkness welcomed me to its realm.

Picturesque mountains, gushing rivers, densely packed trees, Herta was the epitome of beauty; it could be said that Herta unveiled God’s artistry. It is where my brother and I were born, and where my parents and grandparents had been born. It was my identity, my country, my home, where I took my first steps and spoke for the first time.

“Tariq and Zoya, dinner is ready. Call your Abbu too,” Mama said.

“Damn this power hungry Haza country!” Baba clamored, turning off the television, “Hazan occupation is growing at a menacing pace and with this rate we’d be invaded too.” The worry in his voice sank my heart.

“I thought so too, Zoya, but it’s been a months since curfew was imposed, the security has been tightened, military is on red alert,” Baba reasoned, “Everyday there are more fallen soldiers on the borders.”

Baba was a military doctor and served in military for twenty-five years.

“How bad would it be if Hazans attacked?” Tariq questioned.

“Worse than hell,” Baba’s answered which sent shivers down my spine.

We ate roti (flat bread) and curry for dinner—a blessing urging me to be grateful for the days during curfew when food had to be sneaked in to satiate our appetites being over. Some days were better, some worse. The threat of war loomed every day and we learned to live with it, making our peace with it. The time before curfew seemed ages ago and the memories of our long walks under the starry nights, and the board games we played under layers of blankets filled me with hope for a better tomorrow.

At night, before going to bed, Baba called me to his room. “What I’ll tell you, you will take it to the grave, Zoya,” Baba said. I nodded and with thoughts bombarding my mind, tried to anticipate what he would say.

“Take this red button and keep it safe, no matter what.” Before questions could escape my lips, Baba continued. “After the war in 1977, we knew most countries would try to invade us; we were already so drained after the war, our military and defense, economic position became so feeble that our deterioration was inevitable but God saved us,” he recalled. “To make our defense strong, we built nuclear weapons after relentless failures because of which we suffered heavy sanctions.”

My mind raced, unable to comprehend the gist of this conversation.

“One of our men betrayed us and leaked this information to Haza. Hazans were persistent on finding the location and formula,” Baba whispered.

“Baba,” I tried to speak but he interrupted me.

“They even sent sleeper cells to gain information. Differentiating between friend and foe was extremely difficult especially with the ransom they offered for information. This information has endangered our families. Hazans will not stop until they extract it and they will not care if they have torture or kill for it.
“A secret team including me worked on this red button to erase all memories including the ones containing the information that have made us so vulnerable. When you press this, it would erase the memories of even those around you completely.”

Questions troubled my mind. What team? Who else had this button?

“Baba! No! I will not rob you of your memories!” I protested, “You’ll forget me, Tariq and Mama! No!” My voice cracked and tears threatened to flood my eyes.

“Zoya, always remember: country before anything, you must-. “

Our conversation was interrupted by the most dreaded siren piercing through the air. Anti-aircraft guns pointed skyward, By using ropes from planes they poured from sky. They blew across ramparts, fluttered into ravines between houses. Thunderous sounds of gunshots punctured the atmosphere, and frantic screams broke out.

“RUN! HIDE!” Baba exclaimed, but it was too late. Our house shuddered and everything started to crumble. Knowing this was the end, I clenched the red button and closed my eyes so tight that it hurt. All I felt was utter pain from being hit. And like my house, I collapsed too.

The ground was crammed with guts and a nauseating waft arose from it.  I woke up to witness brazier-red blood trickling from my wounds. Excruciating pain almost knocked me out again. I could hear the screams penetrating throughout my mind. I looked around to realize the absence of Mama, Baba and Tariq. I had to find them. The thought of something happening to them crushed me worse than any physical pain. Beside my foot was the red button. Retrieving it, I set out to find my family.

As I labored to breathe whilst frantically trying to locate my family, I spotted a similar shirt across the wreckage. Tariq! I rushed to him. My body was momentarily paralyzed; his tiny body lay in a pool of blood. His face was distorted like a smashed pumpkin.

War. This three-lettered word cannot describe the true horrors and the calamities it causes. It is hard to fathom how much collateral damage man’s hunger for power can cause.

The Hazans now patrolled the area whilst gunshots rained. Grenade shells swamped through the ground like stones on road. After some time, the whole area fell silent. It was now a field of blood and death. The wind howled in misery at the sight it had witnessed and, a heart-shattering cry could be heard from afar. Not one cry but thousands of cries joined together in one single song of misery. The wind still blew in sorrow.  Still, no life came to the sprawled bodies. The land was now a silent river of death that crawled into the escaping souls of the bodies.

Reluctantly, I left Tariq promising myself that I would give him a proper burial. I hid and limped through the streets in search of my parents. The theatre of death was stormed with sounds of mourning and wails as land beneath me soaked red.

A tortured cry broke out and I staggered my way towards it. After crossing two streets the source of sound revealed itself.

It was Baba. He was not alone; two men held him hostage.

“Where is it!” A bearded Hazan soldier shouted.

Baba’s face was bruised badly. Unable to obtain an answer, the armed man got ready to plunge a sharp knife into Baba’s thigh when I screamed. Suddenly, an iron grip held me off from running to Baba.

“You got a death wish, girl?” I could feel the mockery in that question.

“Leave her out of this! Please!” Baba begged.

“She must mean something to you,” the soldier holding me off scoffed.

“What is she to you, Raza?” A knife so close to my neck made me forget how to breathe. I understood now how your loved ones have the power to make you the most vulnerable.

“Ahh! Accepting defeat so soon. We were just warming up,” the bearded man taunted.

Thoughts clashed my mind but I could not give in to them. Our lives were in grave danger. I shot my head back, hitting the man whose grip grasped me. Before the man could recover, I took out the red button.

I hesitated pressing the button but my fingers tightened their grip around it. The fear of losing the very memories that kept me from losing my mind scared me. My hands shook as this dilemma consumed me. But then, I heard a shot from near me. It took me a second to wake up to the reality of what was happening and I grew numb when I saw the body of my father fall to the ground with a thud.

Was this really a memory worth having? Would I be able to live knowing my father was shot before me? Would I survive not knowing where and how my mother was?

I pressed the red button and everyone around me lost their memories, precious or terrible alike.