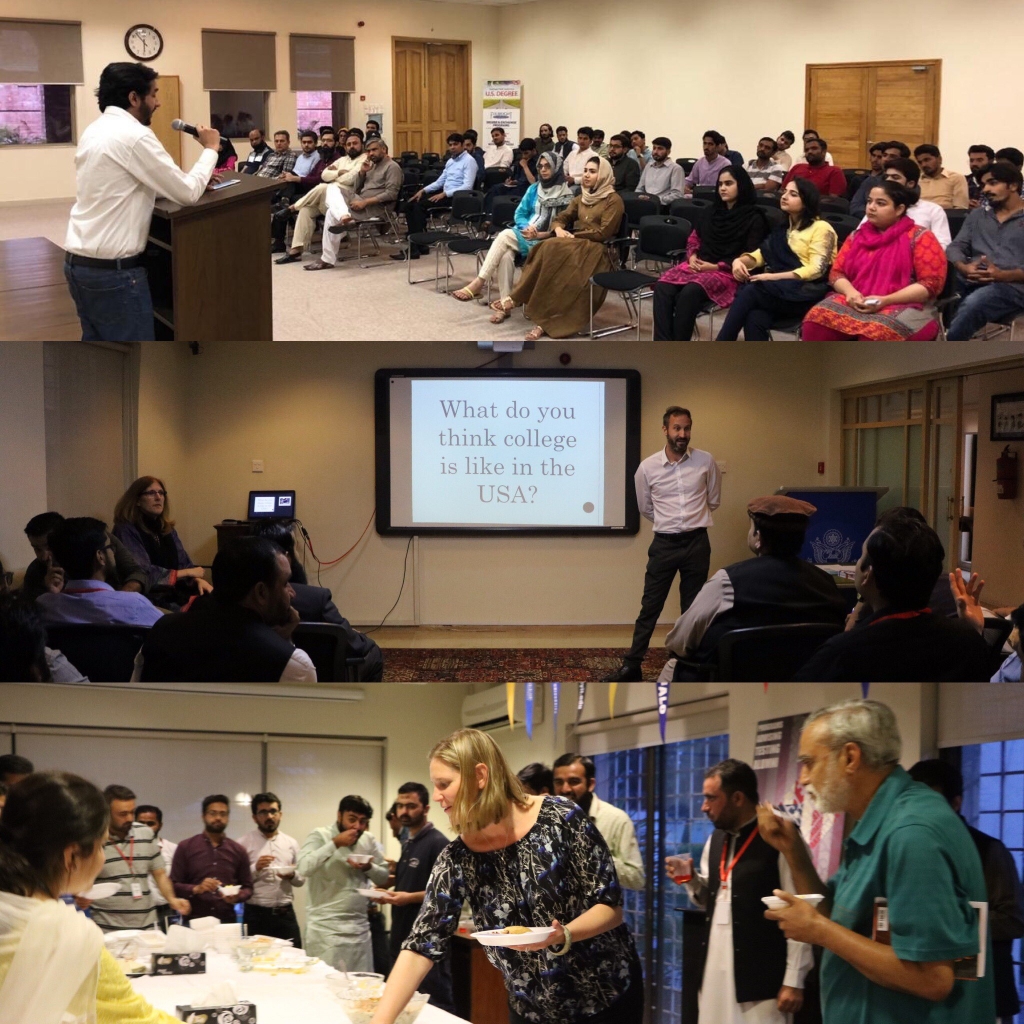 The Ramadan Speaker Series hosted by EducationUSA in Pakistan is a cornerstone of programming during the fasting month. The events, hosted in the evening and capped by a hearty iftar, usually feature presentations by U.S. Embassy officers in Islamabad or U.S. Consulate officers in Lahore and Karachi. These presentations cover various topics related to life in the United States, often through a perspective relevant to international students. This year, 243 students attended five Ramadan Speaker Series events, two of which were hosted in Lahore and three in Islamabad.

In Lahore, a talk by Public Affairs Officer, Michael D. Guinan targeted students of all ages with a common interest in law. In his presentation, Guinan discussed various legal principles, illustrating them with real life examples, in addition to detailing ethical issues related to the student experience. These included academic integrity, discrimination and exploitation of students, and freedom of speech. A second presentation was delivered by Taha Tariq, who advised attendees on how to become effective public speakers.

Press Officer, William Holton, kicked off the Speaker Series in Islamabad, describing the international student experience on U.S. campuses. Holton covered topics including differences between the college experience in Pakistan and the U.S. and why the U.S. is an attractive study destination. Deputy Director of International Narcotics and Law Enforcement, Chris Bergaust, dug deep into religious diversity in the U.S. at large, and also on campuses across the country. In addition to giving an overview of various religious colleges and universities, Bergaust discussed the various freedoms guaranteed by the U.S. Constitution and Bill of Rights to safeguard individuals practicing their faith. Foreign Service Officer, Katrina Barnas, engaged attendees with stories about her multicultural friend group in her home of Brooklyn, New York. After an introduction to her friends, Barnas spoke about Salaam Reads, a Muslim-centric book imprint at Simon & Schuster launched by her friend, Pakistani-American Zareen Jaffery.

Before taking questions from audience member, Barnas turned the tables on them: anyone who correctly answered one of several trivia questions based on her presentation, won a Salaam Reads young adult novel or illustrated children’s book. About 15 beaming attendees left that night’s event clutching new additions to their personal book collections – some, eager to dig in, had already begun leafing through their prize books.

If you’re interested in pursuing higher education in the U.S., email advising@usefpakistan.org for your 5 Steps to U.S. Study plan! Visit our website for more information on USEFP’s scholarship and exchange programs.