Earlier this year, we ran a Creative Writing contest for young writers between the ages of 16 and 18. It gave us the opportunity to read through hundreds of excellent submissions received from all across the country. Presented here is Noor Shahzad’s submission which was awarded first place in the contest. She’s currently a student at Lahore Grammar School in Lahore. 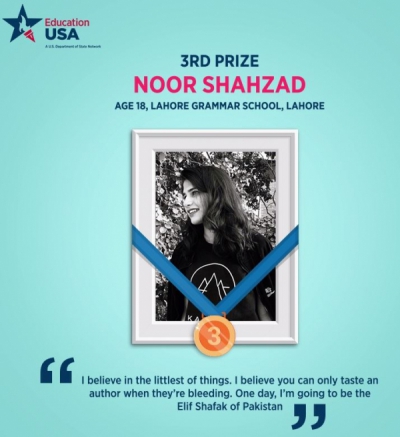 The Chaudhry villa shone in the dark night, and not just because of the many colored, twinkling lights that covered every inch of the concrete giant and its’ framing trees. It shone because you could hear perky laughs and the mismatched clatter of crackling radio tunes, even if you stood on the far end of the village, where the old, stray dog sat, guarding the outskirts of this little abundance.

The young boys inside wearing brightly colored clothes, danced with their feet bare. Most of them holding handheld radios that sang different tunes. They sang with hoarse voices, adding to them, the laughter that issued from this preternatural evening.

The women and girls remained sitting, on the decorative pillows and cushions. Their innocent giggles, escaping from the hands covering their lips. They would clap their hands to the beat of the little drums, jingling their glass bangles and belled shawls.

The old women of the village sang tunes from their times, ones that spoke of the blessings of marriage and antics of the in-laws. Ones that very poetically instilled the idea of patience and compromise into young girls.

Every now and then, a new guest would enter through the parade of dancing boys, carrying a plate of different grains and sweets. They would firstly go to the far undisturbed corner of the room, guarded by the maids’ daughters, who had laid kitchen clothes on the floor. They would pour their portion of the gift to the matching heap. Some would bring a plate full of rice, others would bring half of a small bowl’s worth of common flour. As the evening progressed the heaps became larger. They would later be given out to the needy, in exchange for their prayers to bless the marriage.

Now if you were to look at the set of old antique chairs, covered by embroidered silk and decorated by satin cushions of the softest, yet most vibrant colors, you would see our bride and groom. The pair were a couple of, forever smiling, dolls, no larger than a grown man’s palms. Yes, they were dolls.

The little bride was made by the hands of the Chaudhry’s own granddaughter, she had spent countless afternoons stitching the dowry for her precious doll. Little Sehr would tear apart her mother’s fancy clothes, and with the help of her cousins and the poor village girls, who hand made it a habit to follow Sehr around, she was able to complete a set of twenty dresses.

The groom had been wearing a bright gold sherwani, the one he had been wearing since the day he was stitched. He wore a hat to excuse him of having a bare head, unlike the bride, whose single hair had taken time to thread.

On one afternoon, Sehr had talked the maids into cooking a small lunch for her dolls’ wedding, it was a matter of self-respect, after all. She couldn’t just wed her precious doll without a proper farewell. The maid had mentioned it to the lady of the house, and with her approval, the preparations had started. With every passing day, of the next week, preparations for the wedding had started to escalate. At first it was only the maids and their children, then everyone around the villa had started feeling the excitement, it wasn’t much later that the neighbors and relatives chimed in to make the evening so grand.

Today, Sehr sat beside her doll, tears in her bright little eyes, dreading to say goodbye to her precious guriya. Her best friend, and now sister in law, Maryam, wore the brightest smile. She was jubilant today, after all, her Gudda will get a wife, and such a rich and beautiful one!

Sehr’s grandfather had sent his men to the city, to buy the best meat and rice for the feast. Her mother, had cooked all of it herself, not wanting the maids to cook at such a special occasion. She had made such a delicious roast, with biryani for everyone to feast on. Another gesture by her grandfather has been his willingness to buy colas from the city market.

After all the guests had eaten, and had hugged the bride farewell. They stood at the gates of their home, as the groom’s side took the bride under a veil of bright red, and danced their way into the night.

It had been very late when the men of the family had come back home. They had wanted to give the women and girls the house for the evening, to attend to this charade as they wished. Their food and drinks had been laid out for them, their tea still hot in the steel kettle.

‘How did my precious daughter like the wedding? The entire village is talking about how lucky your dolls were to have a wedding most girls would only dream of.’ The old man laughed heartily, as everyone around him sat up with tired smiles painted on their faces.

‘Of course she is very happy, aren’t you my Sehr?’ The plump lady poured the tea out for her husband.

Sehr nodded at her mother, her mind wandering towards her doll again.

‘My daughter, do not keep thinking of your Guriya again and again. Once you wed your daughter, she is not yours anymore. This is not Guriya’s home anymore.’ Grandmother spoke firmly, speaking lines which had been ingrained into her since she, herself, had been a child.

‘Your Grandmother is right. Now when you get married, this won’t be your home anymore. You will go to your husband’s house, and make a home there.’ Her mother had been smiling while saying this, and Sehr did not know how?

How could she just leave her family? The place she had grown up in?

‘Not for a long time now, right? I’m still only sixteen.’ Her eyebrows had been knotted with worry, and her mouth slightly ajar at the quietness in the room. For her, it seemed that the night’s liveliness had been dampened.

‘When I was sixteen, I had you learning how to speak fully.’ Her mother hugged her shoulders.

‘You are my little doll, and I will make sure to give you the grandest wedding you would have ever hoped for.’