In Their Own Words Spotlight Alumni 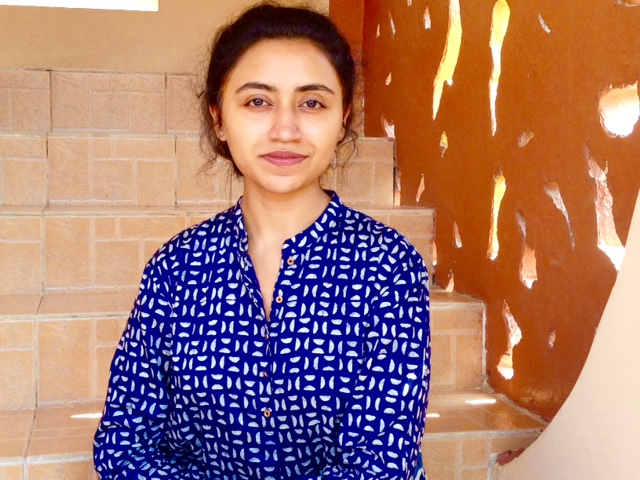 When Varsha Thebo set out to Atlanta, Georgia to study sociology at Agnes Scott College, under the Undergraduate Semester Exchange Program (UGRAD), she never dreamed it would become her home for the next three years. Hailing from Mirpur Khas, a small village in Interior Sindh, Pakistan, Varsha would go on to continue her undergraduate study in the U.S., and work with various cultures in educating young women around the world. Her extracurricular interests and activities would so impress the Board of Agnes Scott College that she would be offered a fully-paid stay to pursue her education at the College.

My UGRAD experience opened so many doors for me that I never even thought existed for a small village girl in Pakistan. Growing up, I was always bombarded with stereotypes for people who were different from me and it was with these stereotypes, that I embarked upon my first ever international trip through the Global UGRAD. However, it didn’t take me long to realize how ridiculously similar we are. Never did I think that a Kyrgyz girl and I would share the same jokes or that a German girl would backpack around Florida with me and become one of my lifelong friends. When my American roommate couldn’t go to her house during Thanksgiving break, we both not only celebrated the day together but spent the entire night talking about how much we missed home. Through the UGRAD, I became convinced of the fact that no matter how many things are wrong with the world today, there are still more good people in the world than bad. This realization changed the course of my whole life. I started to feel that helping anyone anywhere in the world is just as soothing and satisfying as helping your own country(wo)men.

We often hear about the extracurriculars of our UGRAD grads; what activities were you involved with at Agnes Scott?

I was running two small study circles for girls in Tharparkar and Umerkot districts. The idea was to teach them some numerical skills, reading and writing, and a little something about this beautiful universe. As I grew up in a village myself, that we all slept under the stars every night in the summer, would trigger me into asking a ton of questions about the sky and stars and everything. But in an area like that I could only gain an education from schools that were mostly abandoned, my questions went unanswered. However, when I started teaching myself all these subjects, sometimes entirely on my own, and other times with the help of my father, I decided to help the little girls who might not necessarily have fathers like mine, willing to help. There is incredible potential in the girls of rural Sindh and I cannot, at least in my lifetime, let structural inequality ruin their futures. I started helping them because I know how it feels to have unequal opportunities.

I began reaching out to several organizations for the sex-trafficking survivors in Cambodia for a grassroots project of helping them write their stories. Another site was a girls’ dormitory run by Mr. Alan Lightman, called The Harpswell Foundation where I served as a Leadership Resident and implemented the same writing project. The project was based on the idea that even personal stories can bring change and that writing is a medium for catharsis. The girls came from rural areas in Cambodia and were attending universities in Phnom Penh. It was the best job I have ever had. Living with an incredible group of brave women who surmounted all the obstacles in their lives only to acquire education gave a direction to my own life. I learned that women, no matter what part of the world they come from, share similar stories. One of the major components of the interaction with the women was also to raise awareness about the mental health issues facing women.

There is incredible potential in the girls of rural Sindh and I cannot, at least in my lifetime, let structural inequality ruin their futures. I started helping them because I know how it feels to have unequal opportunities.

On November 4, First Lady Michelle Obama mentioned your hard work and intellect in her keynote speech at the World Innovation Summit for Education (WISE) in Doha, Qatar. How did you get involved?

One of the main reasons I got accepted for WISE was because of my project for the District of Umerkot, Pakistan that got accepted as one of the ten best in the world by the United Nations. It was a joint contest by the United Nations Academic Impact/UNHATE Foundation and as a result, my project to promote interfaith harmony got selected. Currently, I am working on designing a secular syllabus with the help of a few Harvard students from the department of Education for the middle schoolers in Sindh, Pakistan. Although Sindh has always been immune to the epidemic of extremism in Pakistan, I am concerned about its future because of the subtle segregation between neighborhoods and schools in certain areas. The idea of the project is to nip it in the bud so that we can retain our same old Sindh which has always been the hub of tolerance, intellect, and Sufism. This project will mainly be implemented in December and January with a huge musical event in January with the participation of folk and Sufi singers from rural Sindh.

Currently, I am also working with the Department of Global Health at the Centers for Disease Control and Prevention. I am collecting data and designing the newsletter for the department, based on the issue of health as a human right. Some of the stories will also be associated with the public health work I had been doing in the rural areas of Sindh and Cambodia. I am also in the process of fundraising for a Public Health grassroots project for the slums in Nairobi, Kenya.

It was incredible! There is no way I can sum it up in words, but I am going to try it anyway. Attending the summit was a way for me to be convinced of the fact that there is nothing in this world that is unachievable. It is almost as if the world is all yours to take over. I saw how much we have progressed as a species. Education is the only solution for all ills. No talks of bullets, wars, baseless negotiations. It was just a beautiful and meaningful exchange of innovative ideas, innovative solutions to the problems, thought-provoking lectures and the most amazing people from all around the world. I had a chance to meet with the rest of the members of my cohort who, to my utter delight and amazement, were equally passionate about working towards restructuring the world to be fair and just for all. Their work, experiences, stories and friendships have changed me in a myriad of ways and all for better.

Hearing the amazing Mrs. Obama, the brilliant Ms. Leymah Gbowee who also happens to be the Nobel Peace Laureate, Dr. Sakena Yacoobi and all the educators and economists from around the world that I only read about in books and who were right there in front of me was an amazing feeling. I saw that when it comes to making this world a better place, none of us is better or more special than the rest. We are all in this together. We are all thinkers, we are all doers and this is why WISE Summit was so special.

With a string of such successes behind you, what are your plans for the future? What new summits will you be scaling next?

[I have] lots and lots of plans and ideas! This might be too ambitious but I want to be the Education Minister [for] Sindh. That is a long-term plan, of course. I do not want to harp too much about this but as I said before, I have not just been an observer of the systemic inequality in the education system but a victim myself. It is proved that if you live through an experience, you come out with better ideas to address the problem. I want to pursue my masters in International Education Policy. I also plan to actually transform my small study circles into a full-fledged organization. It would still be a study circle but would have more resources available for the amazing students to learn, grow and live better and conscious lives.
Tagsagnes scottugradvarsha thebo

Life in America Through the Eyes of Our Opportunity Fund Students

Each year, Team EducationUSA Pakistan revels in the acceptances that roll in for our Opportunity Fund (OF) cohort ...