The Fulbright cohort 2019 at the pre-departure orientation

In July, over 150 inspiring Fulbright grantees from across Pakistan gathered in Islamabad, to attend the pre-departure orientation hosted by USEFP. These grantees will attend 70 U.S. universities to study and conduct research in a wide variety of academic disciplines, including engineering, social sciences and energy management.

The two-day orientation event was aimed at preparing the departing batch of Fulbrighters for their journey to the U.S. The event included an alumni panel consisting of seven talented Fulbright alumni who after completing their degree programs have returned to Pakistan and made significant contributions to their communities. These alumni reflected on their academic and social experiences in the U.S. and discussed how they utilized the knowledge and experience gained in the U.S. to bring positive change in Pakistan.

Guests of honor, American Embassy Chargé d’ Affaires John Hoover and Assistant Secretary of State for the Bureau of Educational and Cultural Affairs Marie Royce, addressed the grantees preparing to leave for the U.S. in pursuit of advanced studies and research. The Chargé d’ Affairs congratulated the students on being selected for the prestigious program but told them to begin thinking about how they can help Pakistan when they return. “What you do next is what truly matters,” he said. “How you take the knowledge you’ll gain in America-whether from textbook, your professors or the everyday challenges of life-and use it to benefit all of society will determine where life takes you.”

Noting that “the President has said that we must empower women as pillars of our society and of our success,” Royce emphasized that 46 percent of this year’s students are women. She also singled out the work of Fulbright alumna Dr. Najma Najam, who founded Fatima Jinnah Women’s University and helped create “the next generation of the country’s women leaders.”

Conversation with the grantees proved that there was no shortage of motivational and uplifting stories when it came to the Fulbright cohort of 2018. They shared how they overcame their socio-economic struggles, the challenges of belonging to an ethnic or religious minority, and even the trauma resulting from domestic abuse, to win the prestigious Fulbright scholarship.

One of the most poignant and inspirational stories comes from Amerta Bai, whose sheer strength of will catapulted her from a ghost school in Umarkot, Tharparkar, to the classrooms of Brandeis University in Massachusetts, where she will complete a postgraduate degree in Neuroscience. During her young life, Amerta has proven to be an individual with exceptional grit and talent. After realizing that she was not being afforded the same rights as the male members of her family, she convinced her father to let her continue her education by going on a hunger strike. Later, she excelled in her board exams, completed her MBBS degree, went to the U.S. for a UGRAD semester exchange program and is now selected for the Fulbright. Surely, Amerta is proof that there is nothing quite as powerful as the human spirit. 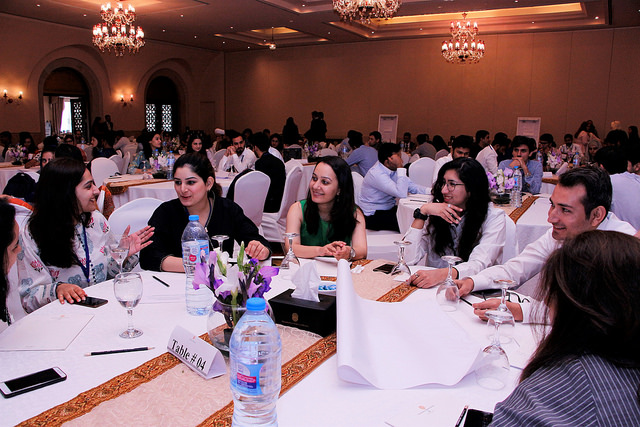 Grantees also got the opportunity to network during the event

Aqsa is another one of these awe-inspiring individuals, who not only completed her education without any financial or emotional support from her father, but also worked three jobs while pursuing her MPhil to financially support the education of three sisters and pay for the treatment for her ailing mother. For another Fulbrighter, Sajjad Ahmad Khan, it was the cancer diagnosis of a loved one that propelled him to pursue a PhD in Nanoscience and Microsystems Engineering, in hopes of improving the treatment options and diagnostic facilities available to patients in Pakistan. Faiza Aziz, a physicist, now on her way to a PhD in multidisciplinary sciences is also an excellent example of turning adversity into action. After ending her abusive marriage, Faiza began working as an independent researcher, striving to build a better future for herself and her child. 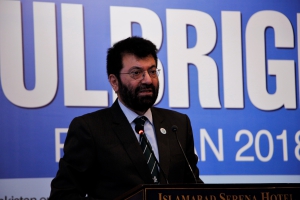 The Chairperson Higher Education Commission (HEC), Dr. Tariq Banuri, was also present at the event. While speaking to the grantees, he shared his experience of meeting talented Fulbrighters in the U.S. Addressing the participants, Executive Director USEFP, Rita Akhtar, emphasized the program’s contribution to Pakistan saying, “Fulbright alumni are working in every economic sector in every region of Pakistan. Returning with skills and knowledge gained at U.S. universities, these Fulbright participants will join these alumni to make an invaluable contribution to the economic and social development of Pakistan.”

The pre-departure orientation this year also featured an address by Muhammad Moiz, the internet sensation more commonly known by his pseudonym, Shumaila Bhatti. Moiz is a Fulbright alumnus, who completed his Master’s of Public Health in Global Health Policy from The George Washington University. During his speech, he congratulated USEFP for their continued efforts and commitment to the Fulbright program, while also highlighting the importance of advocating for international cultural and educational exchange programs. Drawing from his own experiences in the U.S., Moiz shared some useful information regarding culture shock, demystification and unpacking of implicit biases regarding foreign cultures, and the current socio-political climate in the U.S.

At the event, the grantees also got a chance to engage with Fulbright alumni and State Department officials, and to ask them about American culture and what to expect.

The Fulbright Program is the American government’s flagship academic exchange program. To learn more about the program, visit usefpakistan.org.