Reflecting the unique flavor of the higher education system it recommends, International Education Week 2020 was celebrated with a diverse array of events inviting participation from local educators, U.S. embassy officials and of course, the students of Pakistan. In an atmosphere where in-person events and large gatherings are off-limits, this year’s IEW was held entirely virtually, between November 16 and 20. The three EducationUSA centers, by using the infrastructure developed to adapt to our atypical times, managed to extend the reach of IEW 2020 beyond its past concentration within the major urban hubs and create national involvement, enriching the week’s work as a whole.

Kicking off with a collaboration between EducationUSA Pakistan and the United States Embassy, the United States – Pakistan Educational Exchange saw a panel of embassy officials and Executive Director USEFP, Rita Akhtar, converse about the contemporary state of opportunities available to Pakistani students and the holistic impact of Covid-19 on students. Panelist and Minister Counselor for Public Affairs at the U.S. Embassy, Ray Castillo, opined that “[t]housands of Pakistanis are already studying in the United States, and we would like to see even more Pakistani students take advantage of the opportunities to study at our world class colleges and universities. The U.S. Government is committed to supporting academic advancement and exchange programs for Pakistani students from all backgrounds.”

With regards to the symbiotic presence of international students on U.S. campuses, Executive Director Rita Akhtar highlighted that in addition to our local students being able to “compete with the best in the world … American students can learn a lot from their Pakistani class fellows, and this is one of the important reasons that U.S. universities welcome and actively recruit good students from Pakistan.” 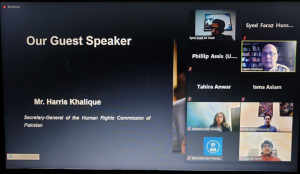 Next up was a reprisal of an old favorite, the Dramatic Reading Competition, targeting high school students with a flair for public speaking. Participants submitted clips of their monologues of original or adapted work and the prize ceremony, honoring our top three, was attended by eminent poet and activist, Harris Khalique.

The annual High Achievers’ and Counselors’ Recognition Ceremony celebrated 240 Pakistani students. In a giant leap for the spread of IEW 2020’s message these students hailed from 24 cities and 98 different schools, many of whom were first time collaborators with EducationUSA. The unprecedented reach of this event was not its only novelty; the recognized students’ profiles were sent to 28 participating U.S. HEIs who granted admission and scholarship offers based on their reviews, demonstrating that U.S. higher education is within reach. 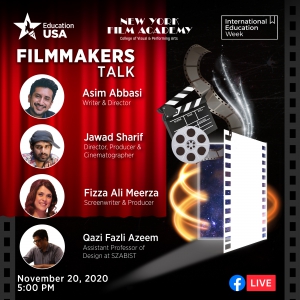 To conclude IEW, EducationUSA Pakistan celebrated the successful completion of its first nationwide Filminute Competition with a panel discussion with Pakistani filmmakers. Responding to the prompt ‘The Magic Door’ the student films were judged by New York Film Academy. Following the announcement of our most distinguished submissions, the final event of IEW was the panel discussion with local directors, producers and screenwriters and included Fulbrighter Qazi Fazli Azeem. The top 10 submissions were made available on our social media platforms, and the talk, which was live streamed, was covered by local media source Cuttacut.

The total reach of the events of the week continues to grow as the live streamed panel discussions now exist for posterity. While the annual traditions of in person festivities were missed, the adaptations to these impediments turned out to be a boon for this year’s events as their medium enabled and encouraged a national focus. A great credit to the quality of the compromises made this year, many of the virtual events may be integrated into the status quo going forward.

International Education Week will be back in November 2021. Until then, keep in touch with your local USEFP office and EducationUSA team by registering for free advising services here.

In collaboration with the U.S. Department of State and the Humphrey Alumni Association of Pakistan (HAAP), USEFP organized ...