EducationUSA In Their Own Words

A graduate of Lahore Grammar School, Khizrah Naveed currently studies at UPENN where she hopes to major in either Chemistry, Math or Economics. Here’s what she had to say about the Competitive College Club (CCC) program and how it has helped her get into a top U.S. university. 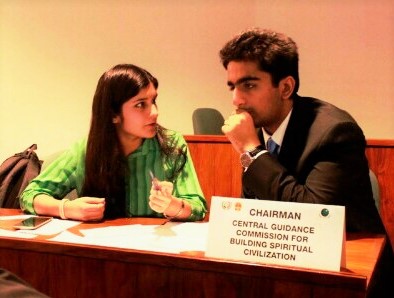 Taken at Model United Nations conference, Khizrah is in discussion with fellow delegate to see if a consensus can be reached on the topic proposed by the committee. Model UN and public speaking were her primary extra-curricular activities through her ‘O’ and ‘A’ levels.

How has the CCC helped you with your college applications?

Firstly, the most important thing the CCC did was give me a head start by outlining everything I had to get done and by when. A big problem I feel students face is juggling deadlines that comprise the application process and giving the requisite standardized tests. So, learning how to navigate The Common App, in addition to giving the SAT, SAT II, ACT and then sending their scores to colleges etc. was definitely a struggle I had. The CCC was definitely a very valuable resource in terms of helping me balance all of my to-dos. Books for all standardized tests were available, but most importantly so was the information regarding which colleges actually required these. Ultimately, the CCC helped me figure out what the requirements were for each of the colleges I was applying to.

What aspect of the CCC did you find most beneficial?

The most beneficial aspect of CCC was that it brought us into contact with representatives from various universities, which gave us a clearer idea about what admission officers were looking for in a prospective student. In addition to this, we took part in various webinars and even Skyped with a representative/admission officer from Dartmouth.

What was the most challenging aspect of the college application and how do you think the CCC helped you address that gap?

The most challenging aspect of the college application for me was not the application process itself but applying for financial aid. I actually had no idea where to start! Fortunately, I consulted with my Education USA advisers who explained what the next steps were in this regard. We even had a specific session at CCC where we discussed the various financial aid forms to be filled and the subsequent deadlines that had to be met.

The most beneficial aspect of CCC was that it brought us into contact with representatives from various universities, which gave us a clearer idea about what admission officers were looking for in a prospective student.

The Competitive College Club program is an intensive group-advising program for Pakistani high school students organized by EducationUSA at the United States Educational Foundation in Pakistan (USEFP). Khizrah Naveed is one of the 58 Pakistani high school students who were selected to participate in an 18 month program which aims to help the best and brightest students apply to competitive U.S. colleges and universities.

Want to be a step ahead of the rest? See how you can be part of the EducationUSA Competitive College Club program at USEFP. Email advising@usefpakistan.org for more information.