In Their Own Words

In the Mailbox: Meeting John Kerry 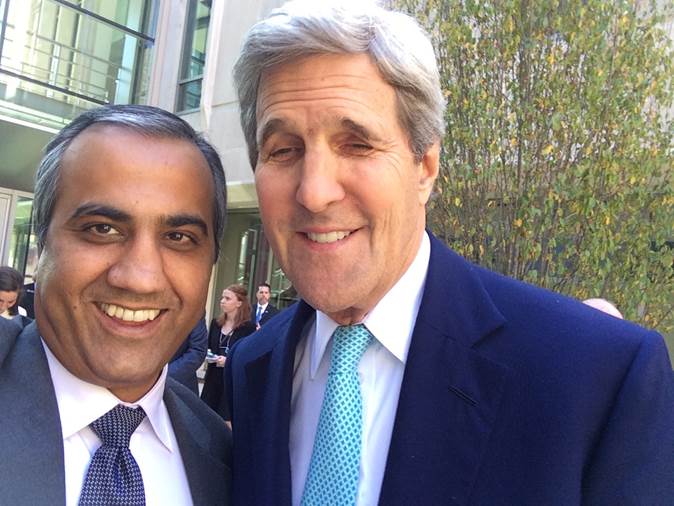 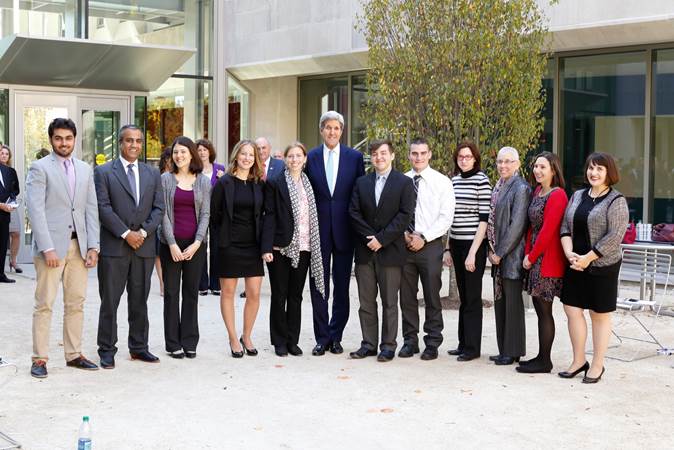 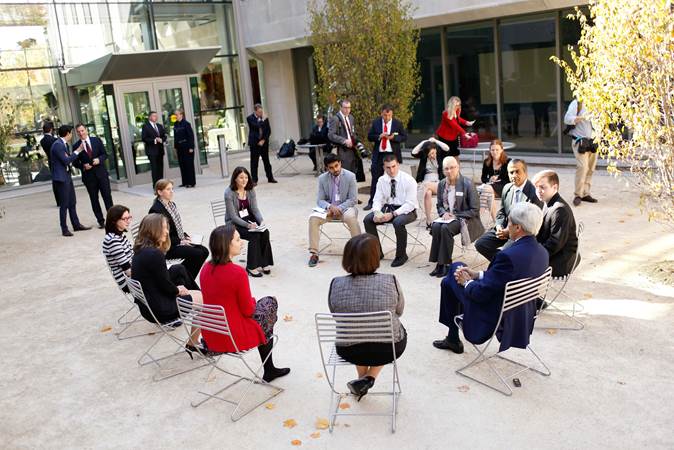 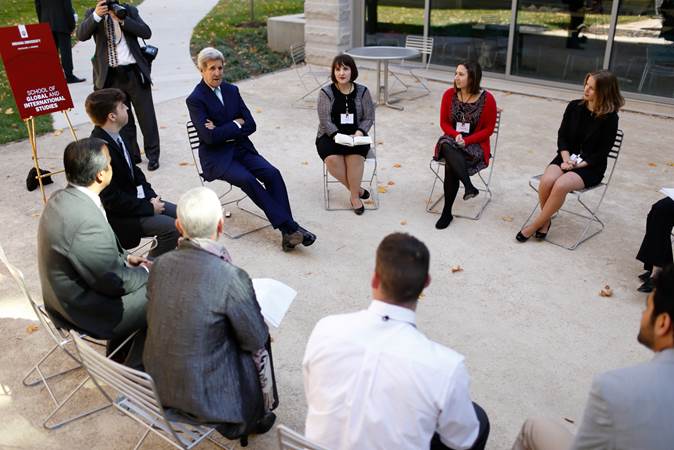 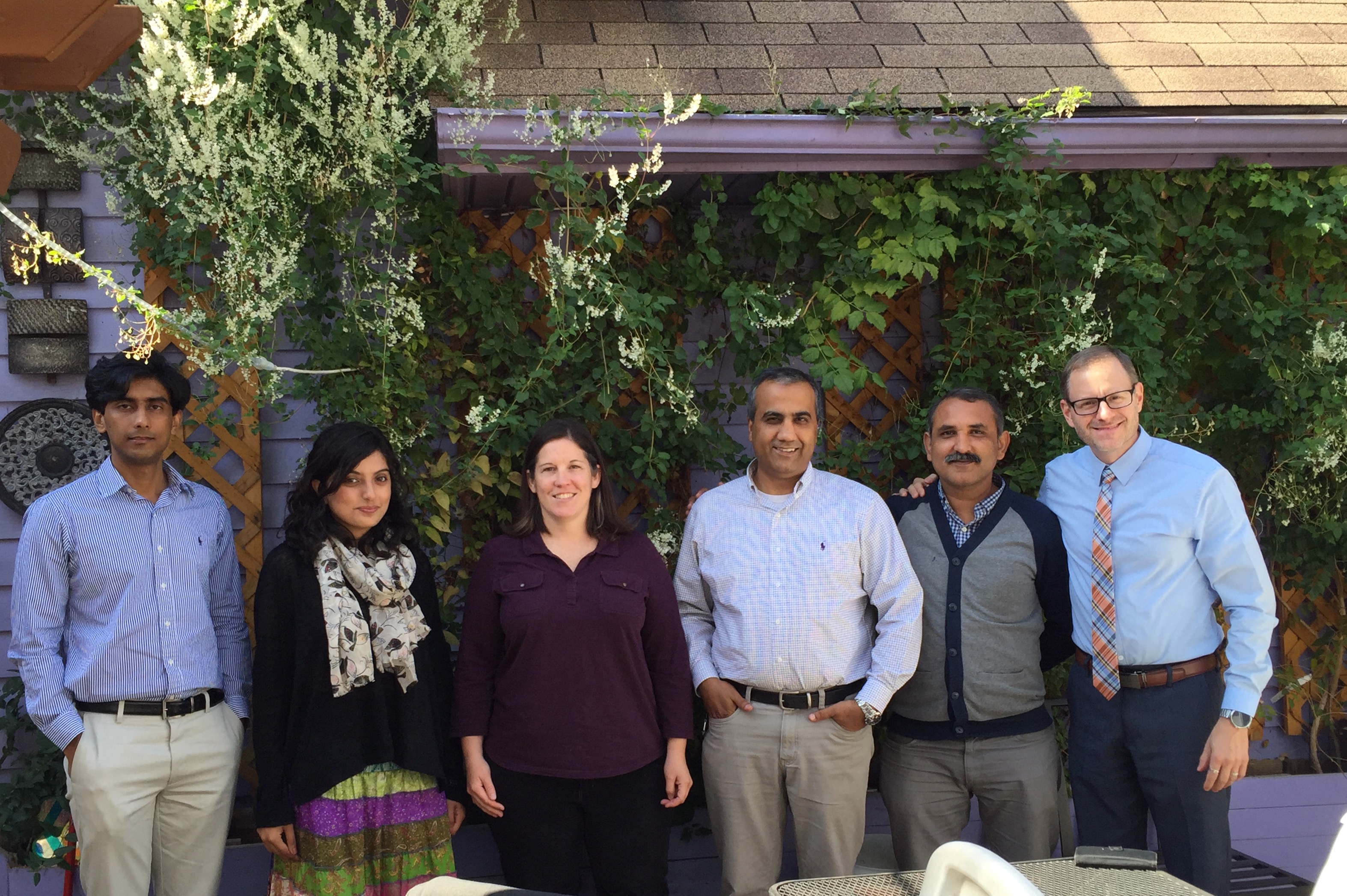 A group of ten students (including myself) met with Secretary of State John Kerry when he visited Indiana University on October 15, 2015, for the commemoration of the new Indiana University (IU) School of Global and International Studies (SGIS). After delivering a wide-ranging speech in the IU auditorium and attending luncheon at SGIS, he met with a group of students for 45 minutes and discussed a broad range of topics.

This group of students was selected after a long and rigorous nomination and selection process, based on their academic performance and achievements, from a body of around 50,000 IU students. Becoming a part of the best of the best and meeting the Secretary was indeed an honor and a once in a lifetime opportunity for someone like me; somebody who comes from the deep mountains of South Waziristan and who acquired primary through to middle school education sitting beneath a tree, on the bare ground, in a single-roomed school. For the other (mostly American) students, meeting the Secretary may have been an ordinary and routine matter, but for me it was an extraordinary opportunity to meet in person, not only the Secretary of the United States of America, but also an extraordinary and inspiring human being whose intelligence is exceeded only by his humility and graciousness.

I am sure my story will inspire hope and assurance to the youngsters of Pakistan’s backwater areas — especially from the tribal areas / FATA — that there are opportunities that will enable them to develop and unleash their true potential.

I was humbled by the fact that the American people / taxpayers provided me with the opportunity, through the Fulbright scholarship, to be educated at one of the world’s best institutions and my own hard work has enabled me to take advantage of the opportunity to the fullest. The credit of winning the Fulbright Phd Scholarship Program, getting a 3.94GPA in all my graduate seminar courses and distinctions in two such courses enabled me to be selected for this group. I am thankful to the American people for providing me with the opportunity and my own humble background and adverse circumstances that inculcated in me the habit of hard work.

I am sure my story will inspire hope and assurance to the youngsters of Pakistan’s backwater areas — especially from the tribal areas / FATA from where I come — that there are opportunities (like the Fulbright Scholarships) that will enable them to develop and unleash their true potential, provided they work hard and avail such opportunities; that there are hardworking, ordinary people around the world (like the Americans) who care about us and give their hard-earned taxes to help their fellow human beings; that they can change the destiny of their people and lands.

Getting inspiration from me and following in my footsteps, many youngsters in my family and tribe have applied for the Fulbright scholarship. Two of them were successful and are currently getting educated as Fulbright scholars in two different universities in the U.S. and I hope others will also follow suit, when my story reaches them.

This piece was originally sent as an email to the International Institute of Education, USEFP’s counterparts in the U.S. Where the USEFP Programs Department handles the departure and pre-departure details of the Fulbright grantees; IIE handles their cases upon arrival in the United States. We are grateful to Ms. Stephanie Sasz for sending us this story.

Life in America Through the Eyes of Our Opportunity Fund Students

Each year, Team EducationUSA Pakistan revels in the acceptances that roll in for our Opportunity Fund (OF) cohort ...